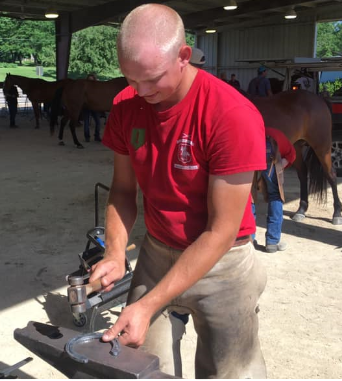 Specialist Justin Mark has received certification from the American Farrier’s Association to serve as one of the soldiers in charge of the farrier work for the Commanding General's Mounted Color Guard at Fort Riley. 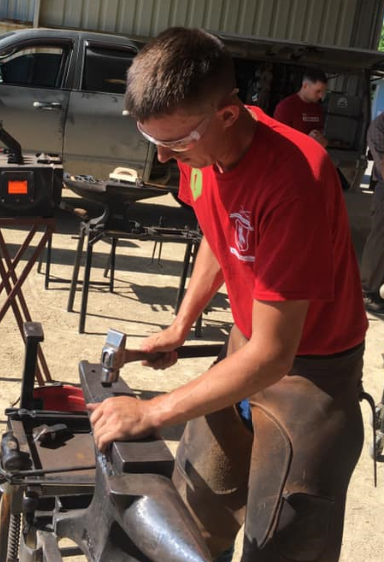 Certified by the American Farrier’s Association Corporal Wrangler Weishaar is a member of the Commanding General's Mounted Color Guard at Fort Riley. He is one of the soldiers responsible for the farrier work on the Color Guard horses.

Specialist Justin Mark has received certification from the American Farrier’s Association to serve as one of the soldiers in charge of the farrier work for the Commanding General's Mounted Color Guard at Fort Riley.

Certified by the American Farrier’s Association Corporal Wrangler Weishaar is a member of the Commanding General's Mounted Color Guard at Fort Riley. He is one of the soldiers responsible for the farrier work on the Color Guard horses.

Soundness of horses ridden by U.S. Cavalry soldiers has been of utmost importance since formation about 244 years ago.

Proper shoeing of Cavalry mounts helps insure efficient action whatever the maneuver for horses and soldiers.

Today is no different than the beginning when the first horse mounted Army force was established in 1776 during the Revolutionary War.

Horses had to be shod and that was not always part of military training. Typically Cavalry riders were dependent on those skilled in horse hoof care to make sure their mounts were battle ready.

The U.S. Cavalry branch was absorbed into the Armor branch as part of the Army Reorganization Act of 1950.

Today, Cavalry designations and traditions continue with regiments of both armor and aviation units that perform the Cavalry mission.

Fort Riley’s 1st Cavalry is the only active division in the United States Army with a Cavalry designation.

A member of the unit nearly two years, Siebert guides the 26-member mounted soldier team with emphasis on morale building.

“Troopers and horses are outfitted in the uniforms, accoutrements and equipment of the Civil War period,” Siebert said. “From privates to officers, these men and women recreate the colorful spectacle of the American Horse Soldier.”

Hoof care of horses became even further from these soldiers’ military training than it was in earlier centuries.

“Our Cavalry riders were in near constant effort coordinating farriers for shoeing their horses,” Siebert verified.

The best solution was to do it themselves. “About five years ago, Fort Riley leadership decided Mounted Color Guard soldiers must shoe their own horses,” Siebert said.

It’s easier to make that military order than accomplishing what is truly a professional skill. “Since then there has been instruction to teach soldiers with farrier interests the basics of horseshoeing,” Siebert explained.

Captain Jennifer Houle wanted to take it further to offer a farrier school for interested Mounted Color Guard soldiers.  “This was to include complete training in horseshoeing,” according to Siebert.

Added incentive for the special schooling was giving participants a skill that would carry on after they left the Army.

Finding a qualified instructor was an initial dilemma for moving forward in the farrier training.

“We are so fortunate that Carey Macy, a professional farrier at Alta Vista, offered his services,” Siebert appreciated. “Mr. Macy spends 12 hours every week working and training two soldiers the skills to be farriers.”

Graduate of Girard Horseshoeing School, Macy has served a large clientele of Midwest horse owners with farrier services many years.

Brandon Stubbs completed one of Macy’s earlier Fort Riley programs and furthered his education to become a certified journeyman farrier.

“It included forging shoe modifications, shoeing a horse within a time limit and passing

“We are pleased to have these soldiers trained to take responsibility for the Mounted Color Guard horses’ hoof care,” Siebert appreciated. “They also can look forward to working with horses as a satisfying obliging career after military retirement.”

The certified Color Guard farriers are also responsible for handling hoof care for teams of Percheron mares and draft mules.

It was noted that Color Guard mounts are typically bay geldings including several wild mustangs.

“Horses ridden by the U.S. Cavalry were bay, sorrel, piebald and buckskin,” Siebert said. “That way the commanders could tell which units were in maneuvers by their horse color.”